Meet Handsome Jax, a fellow that lives up to his name.  He is a very loving, affectionate dog with family and with people to whom he has been introduced.  Once he meets new people and warms up to them, he is their best friend.  He was well-behaved around the previous owner’s 8- and 10-year-old granddaughters and their 1-year-old grandson, although he was supervised with the baby, as he can be rambunctious when he plays.  He played well with their 20-pound Feist Terrier, a 100 lb. male Goldendoodle (more submissive), and a female Rottweiler (dominant).  So with proper introductions, another dog may be good.  He is with our trainer right now, and plays well with his playgroup of larger dogs, including other Airedales, a female Pitbull, a male Great Pyrenees, and two Corgi/German Shepherd mixes.  He enjoys grooming and is good on the grooming table.

Jax walks well on the leash, although he can get reactive to some dogs and strangers that me meets.  He is housebroken and loves his chew toys.  He understands obedience commands including sit, come front, down, heel, and doing tricks, and has completed several obedience classes and therapy dog training.  His previous owner would take him to the nursing home to visit her Mom and he had no problems with the walkers and wheel chairs.

With all of Jax’s positive traits, he has been with our trainer for the last month, because he tries to be the alpha and must learn to respect boundaries.  He will need continued reminders that he is not the dominant member of his pack, and will need an Airedale-experienced, alpha leader.  He needs continued rules, regulations, and lots of love.  It would also be best if he was placed in a family with no children, even though there were children in his last household.  He can get overly excited, so not letting it get out of hand is important.

Here is a video of Jax playing with other dogs.  He is the one with the lighter coat:  https://youtu.be/Qn53cy9Snho 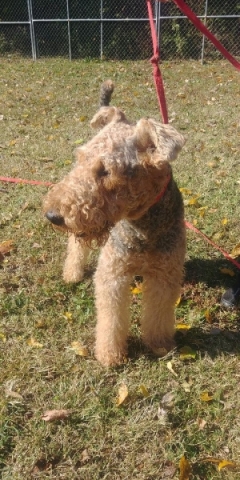 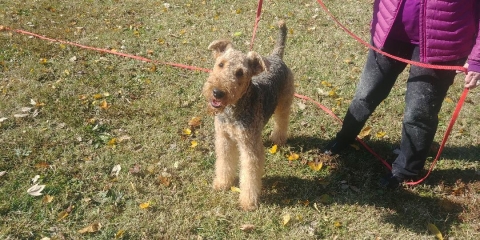